Today marks 10 years since one of the darkest days in recent history.  Last year I wrote about some of my experiences that day while working at United Airlines.  As I went back to read that post, I realized how much I didn’t cover.  I know everyone remembers that day with their own unique point of view and mine is very much as a working pilot.  I told you about flying that morning and the sky being so clear.  It is one of the things I will always picture clearly, I think.  I also spoke of how my day transpired.  On this landmark anniversary, I want to speak of another important thing I took away from the day.

While at O’Hare, after our passengers had been helped, my Captain and I were then left like many others.  We had no idea what to do to help.  You see, pilots are generally type A personalities and we like to fix things…immediately.  Like everyone else, we were left helpless as we watched the horror of the day unfolding.  We watched film of OUR airplane, our brothers and sisters, our customers being used to commit an atrocity.  There was a banding together in the crew room with people I had never met as we cried over the losses.  We became friends even though we had never met.  When we finally got to our hotel room, we rode in on a bus with some of our customers.  Later at dinner, while we watched the President speak to the country, those same customers bought our dinners.  They thanked us, even though they didn’t know us, for doing our job safely every day.  After we finally got the air traffic control system moving again, I was on my final leg home out of Portland, OR.  We came to the airport to find passengers dressed in their red, white and blue.  Perfect strangers banding together to go get on an airplane to Washington, DC, because no one was going to keep them from taking their trip.  They bonded, they hugged and that flight home was one of the best of my career.

So I guess that is my focus for this tenth anniversary.  Putting away the differences, showing civility to a stranger, assuming the best instead of the worst.  Figuratively letting the clouds clear and allowing ourselves see that beautiful blue sky again. 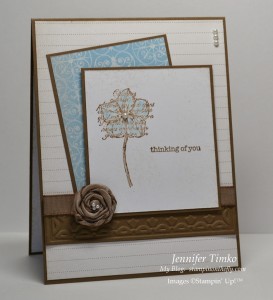 I suppose it isn’t hard to see my inspiration for today’s card.  I am thinking of all those who lost their lives on Sept. 11, 2011 and of all the heroes who stepped in to save even more from being lost.  This sketch is courtesy of a brand new sketch challenge, Freshly Made Sketches and is their first sketch FMS1. 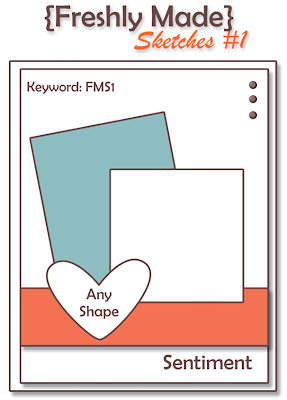 Thanks for stopping in today.  I wish you a safe Patriot Day! 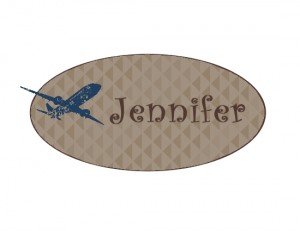 Thank you for sharing both your thoughts and your beautiful card.

Hi Jen,
I had no idea how closely this tragedy affected you. Wow, it was all so unreal and remains so to me today. Are you still a pilot flying planes? Now your banner makes sense and your blog title. Thank you for sharing.

Your card is lovely, the ribbon flower is very cool, need to try that! This card is a perfect “Thinking of You” Remembrance.

Thank you for joining us at Freshly Made Sketches.

Jen,
Thank you for sharing your story. Those stories never fail to make me cry; the kindness of strangers can be so amazing and turn the worst situation into something positive. Big hugs today. Your card is a perfect way to remember and is truly gorgeous. Thanks for joining in our first sketch challenge. ~Rita

Your card is beautiful – a lovely remembrance. Thank you for sharing your story. It is so important to do that. Amazing how the simplest things can have such a positive impact after such a tragedy. So glad you joined us this week.

Thanks, Jen for sharing your story. It is deeply moving to me. Today of all days I am reminded of just what you talk about. The kindness of strangers, the sense that we are all part of something bigger than any one of us, and a nation coming together to heal. Your card is a fitting tribute.

Words fail me. The emotions are still too powerful to express. God bless you, is all I can say. (((Hugs)))

This was such an awful day in our history and at the same time a good day. So many lives were lost for no reason and yet you saw this kindness of strangers, the patriotism that exploded, and a unity that was unshaken. Thank you for sharing your memories.

Thanks for publishing names of Airline Employees who had fallen that frightful Day. They are not to be forgotten too. I believe all who witnessed on the ground and via television, will never forget that day. The day was surreal for alot of us. Only time and our Lord can heal the wounds. The scars left behind, are reminders the we are healing, but should never forget. I pray for all the families of the people who died on that day in NYC, The Pentagon, and in Pennsylvania. God comfort their families and touch their hearts. We all will stand stronger as a people and as a nation, ‘one nation under God, with Liberty and Justice for ALL.

Your card is beautiful as is your tribute to those who were taken from us much too early.

Thanks for sharing your story, I can’t believe it was 10 years ago. Wonderful car and perfect for today. God Bless

Your card is beautiful and I think it reflects the words that you have written. I still admire how you are able to express yourself so well. I was thinking about you on the 11th.

Beautiful! Both the card and the sentiment. I’ve been thinking about flight 93 a lot this weekend. It’s simply overwhelming to me what those people did. Because we are a law enforcement family, I tend to focus more on what the cops and firefighters did that day but there were a lot of heros all over the country that day. And I wish we could all do exactly what you said: put away our differences and looking for the good. Thank you!

Jen thank you for sharing your story, your card is beautiful and reflects what you have written. It was a horrible day but so much good has come out of it as well. ((hugs))

[…] is definitely a bit different from my card entered for the first sketch.  I remember seeing this challenge concept and was so excited. […]