Here we are on Patriot Day.  This is a day that serves to memorialize those lives taken too early on September 11, 2001 and to remember the heroes that have stepped up to serve and protect our freedom.  I have mentioned before that in my “other” job, I am a pilot at United Airlines.  Before being hired at United, I had the privilege of serving in the U.S. Air Force flying C-130’s and T-38’s.  Never did I suspect that my job at United would put me on the “front lines” of an attack, but on the front lines all of us were on that September day.  Here is some of my story.

I must say that the first thing I remember about September 11, 2001 was that it was a glorious day to fly.  I took off in my B-757 with a wonderful Captain and crew out of Providence, RI.  As we flew towards Chicago, I remember seeing Niagara Falls from altitude and remarking to my Captain that days like this are why we fly.  Little did I know…  During that same morning, Capt. Victor Saracini and First Officer Michael Horrocks took off on flight UA175.  Along with their crew – Robert Fangman, Amy Jarret, Kathryn LaBorie, Alfred Marchand, Amy King, Michael Tarrou, and Alicia Titus – they were some of the first heroes of 9/11.  Another set of United pilots, Capt. Jason Dahl and First Officer LeRoy Homer, took off on flight UA93 that morning.  Having gotten word that the world was changing, they and their brave crew – Lorraine Bay, Sandra Bradshaw, Wanda Green, CeeCee Lyles, and Deborah Welsh – fought off the attack and bravely showed what everyday people can do when faced with incomprehensible circumstances.

My flight that day ended differently than theirs but it was a clear reminder to all of us at the airline that “there but by the grace of God, go I”.  Upon landing in Chicago (our intended destination), my Captain and I were faced with a new reality.  We had passengers whose loved ones were calling them to make sure they were ok.  We still did not have any idea what was really happening.  Knowing that my mother worries about aircraft incidents halfway across the world (now I’m a mom and I understand!), I called her first.  Her distress was apparent right away as she wanted to know if I was on the ground.  It then became obvious how bad things really were.  I called my husband of less than three months and he too was incredibly worried.  Of course, he always knows my schedule and knew that I was on a flight in the Northeast that morning.  Once my family was ok, I went back to work.  We went to Operations and saw with our own eyes what was happening with OUR airplanes.  There were frantic people “searching” for friends’ schedules on computers, knowing that some of our brothers and sisters had been killed.  My Captain and I went up to the terminal to help our passengers make some sense of things and show them how to get hotel rooms.  No one could begin to understand the shutting down of an entire air traffic control system.  The day was madness and we all finally ended up in hotel rooms…for days.  During those days we tried to figure out how to get our passengers back home, we waived duty rules, we didn’t want anything to prevent us from working.  Finally, my Captain and I got the call to go to Portland, OR.  When we got to the airport, our passengers applauded (we were applauding them for being there!).  The passenger I remember most was a man in his seventies, I think.  He was going to his daughter’s wedding and had thought he would not get there.  Instead he was on one of the first flights out of O’Hare.  We found out later that this was the first time he had ever flown.  Yep, his first flight ever was on one of the first flights out of O’Hare after 9/11.  He was a wonderful man and when my Captain got to meet him, the man was given some of those little plastic wings.  He laughed out loud and told us what a lovely flight and crew we had.  And THAT, my friends, is the piece to remember.  That spirit of kindness and generosity was overwhelming to all of us that day!  There are many more things but enough, I think, for today.

Speaking of the spirit of generosity, I had my open house for Operation Write Home yesterday and here is the final result: 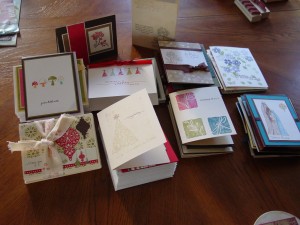 Just take a look at those lovely cards!!  My wonderful friends created a box of 110 beautiful handmade treasures to send to the team at Operation Write Home who will make sure they get to our troops overseas.  We had such a fun time stamping and “tucking” and hanging out (although there is a bit more tucking to be done).  I suspect this will become an annual event.  I also have to show you some of the “Dear Hero” letters created by the children to be included in my box.  Such fantastic work that warms my heart! 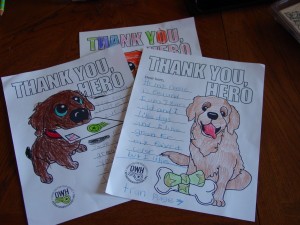 Last, but not least, I wanted to show one of my favorite cards I made during the day.  It uses the colors from PPA59 over at Pals Paper Arts and sketch from the OCC Sketch Blog.  It uses the Watercolor Trio set, some Greenhouse Gala DSP (look at how beautiful the Pear and Olive are together) and a button from the Brights Designer Buttons.  I used the From the Heart words because it expresses how I feel about this entire Operation Write Home event. 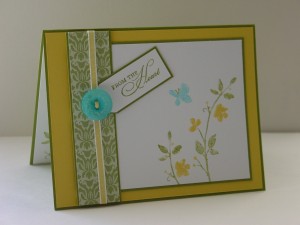 So you see, heroes come in a lot of forms…pilots, flight attendants, passengers, OWH volunteers, card makers, and most impressively, citizens who answer the call to military duty.  Make sure you thank a hero today!

Beautiful card, Jen!!! It’s fabulous that your Open House was so successful, and thank you for the moving reminder of what today is all about. I appreciated hearing about it from your unique perspective, not just as a veteran, but as a commercial airlines pilot who was flying that day. Thank you for sharing your thoughts and story with us!

Thank you, Jen, for sharing your thoughts of that day. I was in a classroom here in the Midwest. I was watching the Today show before my students arrived. I still remember feeling the shock and the horror as the events of the day unfolded, and having to deal with the emotions of my students. It is a day I will never forget. I applaud you for your actions that day, and for the days after, in helping your passengers.

The sentiment on your beautiful card is so appropriate for today’s post. Thanks for joining us at Pals Paper Arts, and thanks for sharing your reflections on Patriot Day.

Jen, thank you so much for sharing your story. If I could hug you right now, I would! Thank you for all you have given to our country and for everything you continue to do through OWH. You are an amazing woman and a fabulous stamper!

Thank you, Jen, for sharing your story with us. It is such a touching reminder of this day. Your compassion in those days following 9-11 is also a wonderful reminder of how we all pulled together in the midst of this tragedy.

Wow, Jen what a story. I haven’t been stopping by here for long so I had no idea you are a pilot. I can’t imagine what it was like to have been in the air that day. It was emotional enough on the ground halfway across the county. I will never forget the silence in the days after when there was no air traffic. Thanks for sharing your story!

Jen, thanks for sending the remembrance of your chaotic week. I, too, remember your mom’s calls to find out about you. It is important that we Never Forget that day. I love your cards.

Jen, Your stories just remind us of the immense kindness and strength of the human spirit! Thank you for what you did then, and thank you for all that you do to this day 🙂

[…] have written a before of my personal experiences on September 11, 2001 on both the 9th and 10th anniversaries so today I will simply ask you to remember.  Remember where you were, how […]

[…] a while, I have written September 11th post for the last three years.  You can read them here:  9th Anniversary, 10th Anniversary and 11th Anniversary.  Every year at this time I find myself reflecting on the […]