My thanks to the OCC Stampers for choosing me as their Featured Designer!  Thanks for visiting!

“We shall not forget the accomplishments of our women fliers and their contributions to the fulfillment of our mission. And we shall always keep and remember
the brave heritage of the women who gave their lives.
It is the heritage of faith in victory and faith in the ultimate freedom of humanity.”  General Barton Yount, Commanding General, Training Command, Army Air Force, 1944

Yep, in 1944 they were told that their contributions would not be forgotton.  But forgotten they were.  Now, over 65 years after the Women’s Airforce Service Pilots (WASP) were disbanded, they were awarded the Congressional Gold Medal!!  Finally!  It is not because they looked for glory but because they answered their country’s call.  They paid their way to training and, after selfless service, paid their own way home when they were done.  They passed around a hat when one of their sisters died to ensure a proper burial.  They were (and are) proud, brave pioneers that paved the way for many who have followed in their footsteps.

On March 10th, my son and I were there at Emancipation Hall in the Visitors Center of the Capitol Building.  The crowd was standing room only and the pride in the Hall was touchable.  Our country’s Congressional leadership stood up and told the story of service, professionalism and heroism.  Sen. Kay Bailey Hutchinson talked about this being one of the final steps of recognition, likening the WASP to the Tuskegee Airmen and the Code Talkers.  Others talked about this being long overdue.  Almost too long overdue since only about 300 of the 1,074 are still alive.  But the day was not about regret.  Instead it was a day of thanks and tribute…beautifully done.  I was privileged to be there.  The medal itself is fantastic and I am so proud of my Aunt Frances for earning it!!

Frances Rohrer Sargent was in WASP class 43-W-4.  After training, she was assigned to Camp Davis Army Air Field, Holly Ridge, NC.  She mostly flew tow target missions.  An enlisted man would reel out a long sock of muslin on a cable as a target for antiaircraft gunnery practice.  She was checked out in 10 different kinds of aircraft.  She also did searchlight practice missions which were very disorienting for the pilots.  More on this is available in the book Women in the Wild Blue in her own words.  This is her WASP graduation photo.  Records are kept on the WASP, including oral histories, by Texas Woman’s University. 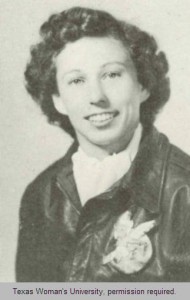 I owe at great deal of thanks to my cousins for helping my son and I attend.  Here is one of the cards I made for them.  I started with the Pals Paper Arts challenge 33 using the colors Garden Green, Certainly Celery and Kraft.  Using these colors means that it also meets the Stampin’ Royalty  “Green” challenge criteria.  I used the OCC Weekly Sketch number 6.  This uses some retired items but I still love the set Branch Out and it will stay with me as a favorite for a long time!  We have a cloudy day so the colors are not quite true.  The leaves are Celery and Garden Green. 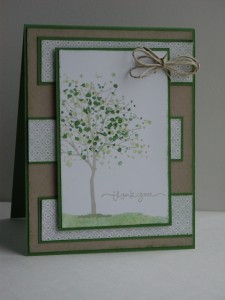 Now for some pictures from the ceremony…

First, the medal itself. 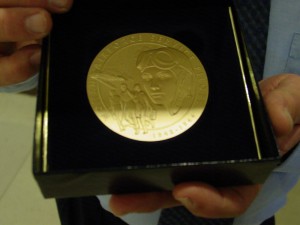 Next, my son and I with my cousin and the medal! 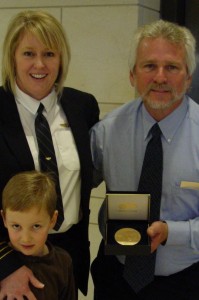 I hope you can, in some way, share in my excitement over this great event.  Thanks for stopping by!!

All products Stampin’ Up!

Beautiful card and wonderful story! Thanks for sharing both, and for playing @ PPA!

Jen, this just gives me goosebumps! Thank you for the update. That medal is beautiful, as is the card. This would make a great SB page or three, ‘eh?

How fabulous for your family! I have enjoyed the opportunity while I was in and even now that I am out of the Air Force of meeting several WASPs at airshows and speaking engagements at the Air Force Academy and elsewhere. These women are amazing and are an integral part of the tapestry that makes up this country’s great history! Thanks for sharing with us!!

First, what an amazing thing for your family! CONGRATULATIONS! The card you made is lovely.

So glad I stopped back to hear the end of the story – just fantasdtic! Perfect thank you card for a perfect day!

The card you made is really beautiful as well as what you wrote. You are very good at bringing a lot of feeling into what you write and I feel very happy for you and your family for the achievements of your Aunt and the recognition she has finally received. Also know that the achievements of people like your Aunt helped liberate people like my parents, who were children living in occupied Holland during the war. So thank you from my family to yours.

Jen, I love your card! And what a wonderful story. Thanks so much for playing with us this week at Stampin’ Royalty.
(Ps – the link in Mr. Linky is not the correct link to your blog on the Stampin’ Royalty blog.)

What a true patriot! God bless your Aunt, she will always be a shining example of what women are capable of. Beautiful card, beautiful medal and amazing story. Thank you so much for sharing!

Three cheers for Aunt Francis and the WASPs. How special that your son was also able to be a part of this proud moment for your family. It’s really neat to see your aunt’s picture, too–you sure do favor her. . .

gorgeous job and thanks for sharing such an amazing story too! Thanks for playing with us at Stampin’ Royalty this week!

Great job on the challenge. What a wonderful story. I love your card. Thanks for playing with us at Stampin Royalty.

oh this is a beautiful card and a wonderful family history. thanks for sharing it with us and how awesome your aunt was a WASP!! thanks for joining us on the OCC Sketch Challenge this week 🙂

Jen, of course I love the card, but I love the story even more! I know just who I am going to assign Jacob to research for his “Women in History” project he will have for me next year. 🙂